Amplifiers: 741 IC is mostly used to amplify signals of varying frequencies ranging from DC to higher radio frequencies. It is also used in frequency selective amplifiers which filter out signals of unwanted frequencies, E.g. tone control systems in stereo and Hi Fi systems.

How many terminals are there for an IC 741 op-amp?

It consists of two inputs and two outputs, namely inverting and non inverting terminals. This IC 741 Op Amp is most commonly used in various electrical and electronic circuits. The main intention of this 741 op-amp is to strengthen AC & DC signals and for mathematical operations.

In this tutorial, we will learn about an extremely popular device called the IC 741 Op Amp. We will see some basics of Operational Amplifiers, packaging and pinout of IC 741 Op Amp, important specifications and characteristics, couple of famous circuits using IC 741 (Inverting and Non-Inverting Amplifiers) and some common applications.

An operational amplifier, also called as an op-amp or op amp, is an integrated circuit primarily designed for performing analogue computations. It has a very high voltage gain, typically of the order of 105 (100dB).

Although they are initially designed for performing mathematical operations like addition, subtraction, integration, differentiation etc.,  (hence the name Operational Amplifiers), by using external components like resistors and capacitors to create a required feedback mechanism, it can also be used as an amplifier and for many other functions like filters, comparators etc.

Op-Amp ICs have become an integral part of almost all analogue circuitry. In this article we will take a look at one of the most used Op-Amp ICs: IC 741 Op Amp.

For learning more about Op-Amps, visit this page:

The 741 Op Amp IC is a monolithic integrated circuit, comprising of a general purpose Operational Amplifier. It was first manufactured by Fairchild semiconductors in the year 1963. The number 741 indicates that this operational amplifier IC has 7 functional pins, 4 pins capable of taking input and 1 output pin.

IC 741 Op Amp can provide high voltage gain and can be operated over a wide range of voltages, which makes it the best choice for use in integrators, summing amplifiers and general feedback applications. It also features short circuit protection and internal frequency compensation circuits built in it. This Op-amp IC comes in the following form factors: 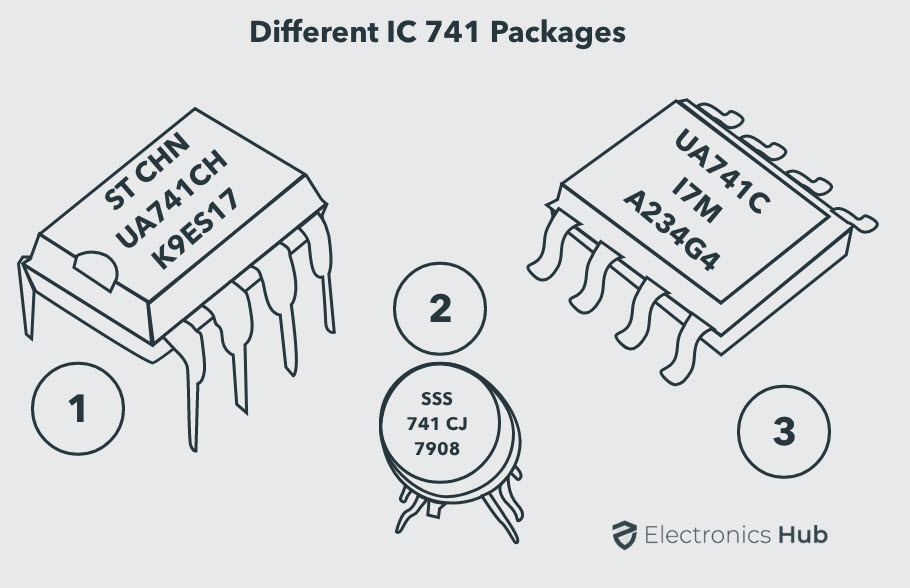 Pinout of IC 741 Op Amp and their Functions

The below figure illustrates the pin configurations and internal block diagram of IC 741 in 8 pin DIP and TO5-8 metal can package.

Now let’s take a look at the functions of different pins of 741 IC:

The following are the basic specifications of IC 741:

NOTE: The above mentioned specifications are generic and may vary from manufacturer to manufacturer. To get accurate information, please refer to the datasheet.

A standard 741 operational amplifier is made up of a circuit containing 20 transistors and 11 resistors. All of them are integrated into a monolithic chip. The below circuit illustrates the internal connections of those components. 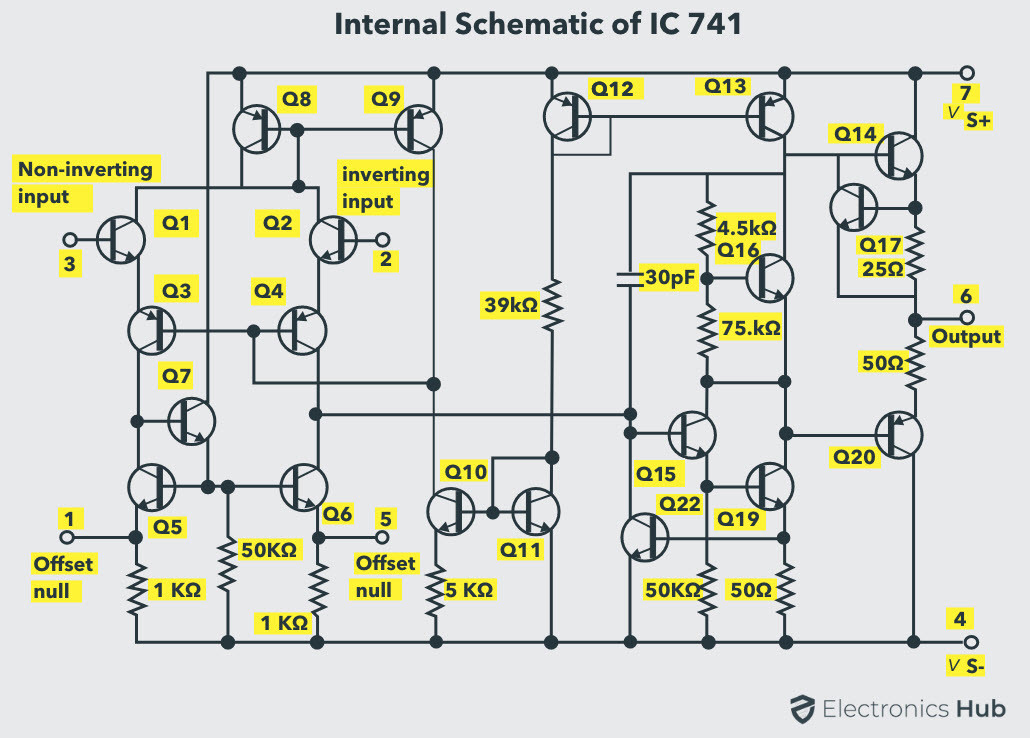 Inverting and non-inverting inputs are connected to two NPN transistors, Q1 & Q2 respectively. Both the transistors behave as NPN emitter followers, with their outputs fed to a pair of PNP transistors Q3 & Q4, which are configured to function as common-base amplifiers. This configuration isolates both the inputs and prevents possible signal feedback that might occur.

Voltage swings at the inputs of Op-Amp can influence the current flow in the internal circuit and it might go beyond the active operation range of any transistor in the circuit. In order to prevent that from happening, two current mirrors are used.

Transistor pairs Q8, Q9 and Q12, Q13 are arranged to form the two current mirror circuits. The transistors Q8 and Q12 are the controlling transistors, which sets the emitter base voltage of the other transistor in the corresponding pair.

Transistor Q6 along with resistors 4.5 KΩ and 7.5 KΩ form a voltage level shifter circuit, which drops the voltage from input amplifier circuit by 1V before it is sent to the succeeding circuit. This is done to prevent signal distortions at the output amplifier stage.

To balance any irregularities at the input differential circuit, transistors Q5, Q6 and Q7 are used to form an arrangement that takes in two inputs (Offset null(+), Offset  null(-)) and balances both the inverting and non-inverting inputs accordingly.

The gain of operational amplifier IC 741 is not constant and varies depending on the frequency of input signal. The below graph illustrates the relation between them: 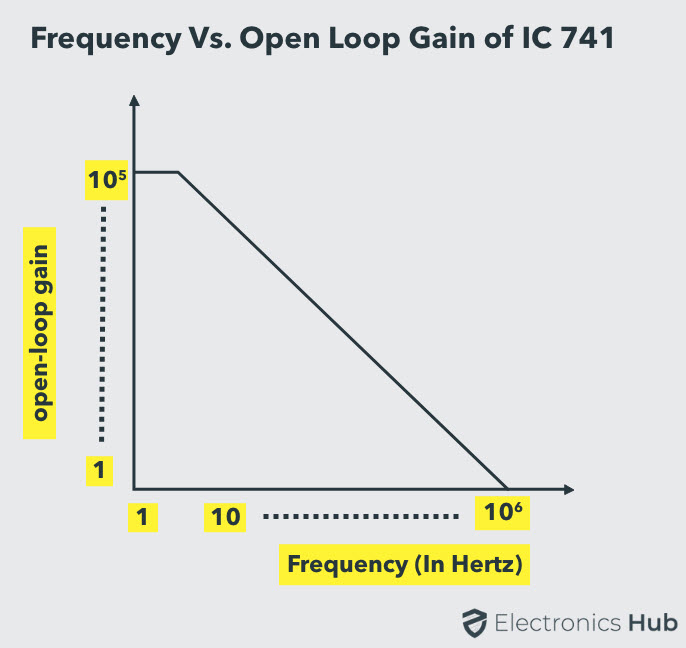 You can observe that the gain remains constant at around 200,000 when the operational amplifier is operated at frequencies below 10Hz. As the frequency of input signal increases, the gain reduces and approaches unity at frequencies around 100,000Hz.

The simplest way to use an operational amplifier is to operate it in the open loop condition.

We will take a look at two different voltage amplifier circuits that use IC 741.

Below is the circuit diagram of an inverting amplifier using 741 IC and two resistors. 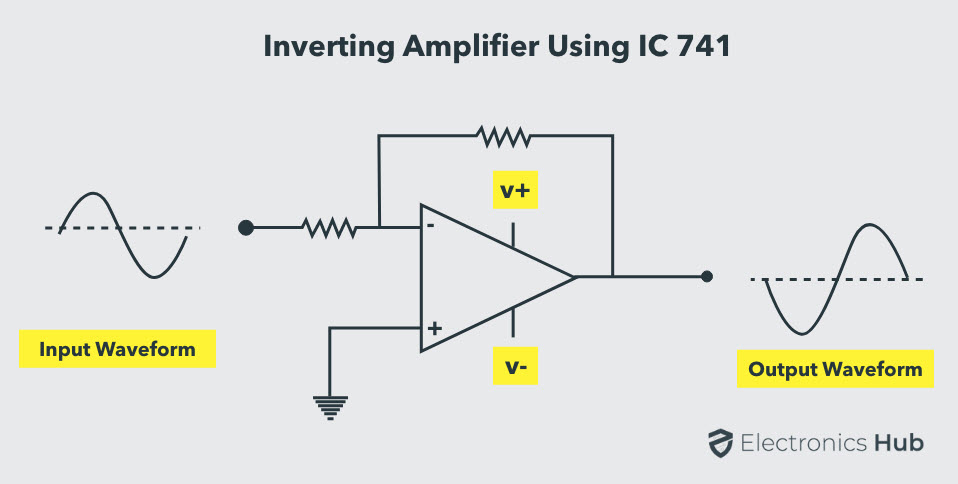 This arrangement is named as inverting because it amplifies and reverses the polarity of input signal (Observe the waveforms at the input and output). Resistor R2 is the feedback resistor. Gain of the amplifier is given by the formula:

Negative sign indicates that the polarity of the output waveform is reversed. By adjusting the values of R1 and R2 desired amplification can be achieved.

Below is the circuit diagram of a non-inverting amplifier using 741 IC and two resistors. 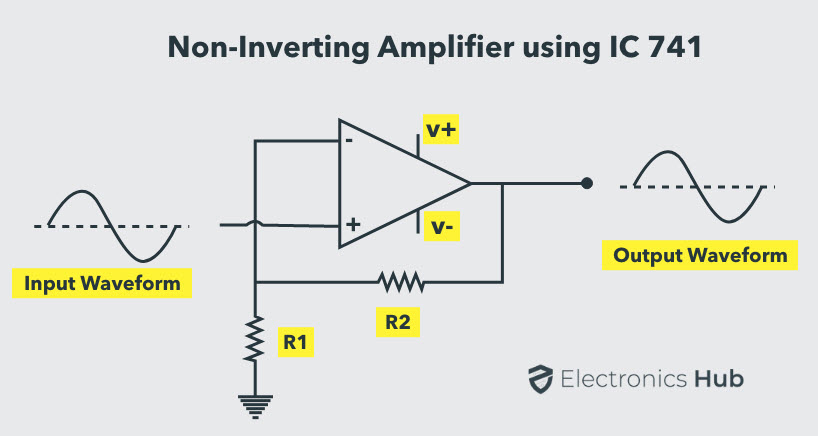 This arrangement is named as non-inverting because it amplifies the input signal, while retaining the same polarity. Gain of the amplifier is given by the formula:

By adjusting the values of R1 and R2 desired amplification can be achieved.

If the value of feedback resistor R2 is made 0, the gain equals 1 and the Op-Amp configuration behaves as a “unity gain buffer” or a voltage follower.

Below are the applications of IC 741 Op Amp across different use cases:

A complete introduction on IC 741 Op Amp. You learned some basics of Operational Amplifiers, packaging and pinout information of IC 741 Op Amp, important specifications and characteristics, couple of famous circuits using IC 741 (Inverting and Non-Inverting Amplifiers) and some common applications.

keep in touch with our social media links as mentioned below

Be the first to review “LM741 point out ic” Cancel reply